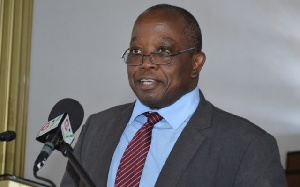 Despite improvement in infrastructure delivery in various Metropolitan, Municipal and District Assemblies (MMDAs) through the implementation of the District Development Funding (DDF), some projects remain uncompleted and substandard, the Auditor General, Mr Daniel Yaw Domelevo has said.

The execution of projects through the DDF in MMDAs, according to the Performance Audit Report on Capital Projects by the Auditor General, had considerably impacted education, health, occupation and the cost of living of individuals in the benefiting communities across the country.

planning, procuring contractors, supervising and monitoring the delivery of selected projects in accordance with sound administrative principles, practices and management policies to guarantee value for money.

“Our audit disclosed that there have been improved infrastructure delivery in MMDAs through the implementation of DDF and the impact on the socio-economic development of the communities has been significant,” the report mentioned.

Meanwhile, the report observed that many infrastructural projects commenced by MMDAs had stalled with some completed ones being substandard.

The situation had resulted in the deterioration of some projects within a short period after handing over, hence, denying beneficiaries the expected outcome, the report added.

“Many infrastructure projects undertaken by MMDAs remain uncompleted for a long time while completed ones are of low quality resulting in their deterioration within a short period after handing over, thus denying users the intended benefits,” the report said.

The report which covered a five-year period (2014 to 2019), noticed through the analysis of expenditure of district disbursement on projects showed that significant portion of budget was used to fund developments of educational facilities, Health (CHPS Compounds), KVIPs (sanitation) and Markets (economic).

Some projects included in the report included a six classroom pavilion at Bawjiase SHS, male, female and children’s ward at the Senya Health Center, and a market at Bontrase, all in the Awutu Senya West District.

Others included a teachers’ quarters at Nyariga, police station at Sunbrungu, both in the Bolgatanga Municipality.

The report which examined the capacity of assemblies focused on; project identification and planning, budgeting processes, procurement of contractors/Consultants, project implementation (Quality assurance through supervision), project status reporting, accountability (monitoring), and sustainability and impact to beneficiaries.

The DDF was set up in 2008 with the goal of improving the performance of MMDAs in Ghana by providing incentives to assemblies that comply with existing legal and administrative procedures.