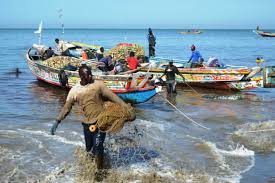 This practice, according to them in an open letter sent to the president, is driving crucial fish stocks to the point of collapse and endangering Ghanaian livelihoods, nutrition and national security.

Saiko is a severely destructive form of illegal fishing, wherein industrial trawlers target the staple catch of canoe fishers and sell this fish back to local communities at a profit. It takes jobs, threatens food security and endangers Ghana’s economy.

Trawlers are able to hoover-up vast quantities of ‘small pelagic’ fish such as sardinella – the main catch of local canoe fishers and a crucial part of the nation’s diet. Researchers predict their total loss within under five years unless urgent action is taken.

“If this menace is not urgently addressed and measures instituted to permanently eradicate it, the source of income for over 2.7 million Ghanaians will be lost,” says the open letter. It highlights that saiko provides jobs to no more than 1,500 individuals, whereas canoe fisheries provide 140,000 jobs to fishers alone and many thousands more for fishmongers – the majority of whom are women – traders, canoe-carvers, input suppliers and fish carriers.

In 2017 alone, the saiko trade took around 100,000 tonnes of fish worth over US$50million when sold at the landing sites. Saiko is costing Ghanaians millions of dollars annually, and threatening coastal livelihoods.

The letter also highlights the risk of unrest and threats to national security: “The loss of jobs among the youth will contribute to a rise of social vices and crime within the fishing communities and our wider society. Collapse of the people’s fish will further undermine your government’s vitally important ‘Planting for Food and Jobs’ agenda.

“We note, with urgency, that any hope of saving Ghana’s fisheries from collapse is contingent on ending the saiko menace without delay,” says the letter. “We note also that, in the context of the global COVID-19 pandemic, safeguarding livelihoods and food security has acquired an even more pressing urgency.”

Steve Trent, Executive Director of the Environmental Justice Foundation – one of the signatories to the letter said: “Ending saiko will be a marker of the president’s leadership. It will be of great importance to the people and Ghanaian nation, delivering an overwhelmingly positive legacy for the president.

“It will enhance food security and safeguard jobs; it will stimulate the economy and boost the nation’s well-being. The fishing industry – from law-abiding trawler operators to small-scale canoe fishers -is in favour of eradicating the crime of saiko fishing. Only the criminals who run this illegitimate, destructive business are opposed.”

New vessels have continued to arrive from China, despite a February 2012 moratorium on new industrial trawlers entering Ghanaian waters to address severe depletion of fish stocks. Of the 68 industrial trawl vessels licenced to fish in Ghana from March-June 2018, at least half were built in 2013 or later – after the moratorium on new or replacement vessels came into effect. 7 million people in Ghana rely on small pelagic fish for their food and income.

In 2017 industrial trawlers caught almost the same amount of fish as the entire artisanal sector, when illegal and unreported catches are taken into account. That is 76 trawlers catching approximately the same amount of fish as over 12,000 canoes or 100,000 fishers. While canoe fishing offers direct employment for around 60 fishers for every 100 tonnes of fish, saiko means only 1.5 jobs per 100 tonnes – 40 times fewer.