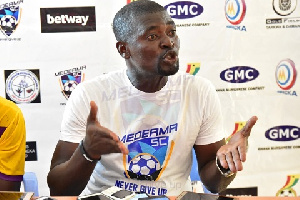 Medeama coach Samuel Boadu believes his club was on course to win the Ghana Premier League before the competition ground to a halt in March.

The elite domestic championship has been on hold since a national ban on public gatherings, including sporting and religious events, came into effect as part of measures to curb the spread of the coronavirus.

Medeama topped the league table at the time of the suspension but six lost points for fielding an ineligible player in a game has seen the side fall to sixth on the standings.

"Considering our peak and our energetic young players, we were surely going for the title," Boadu told Wontumi Radio.

"We possessed the ball more in our games and so if you look at our numbers, we are a team that scores a lot of goals.

“Should the green light be given for the resumption of the league, we are ready to go all out for the title.

"We had targeted to pick at least five points from our next three crucial away games at Kotoko, Accra Hearts of Oak and Ashantigold.

"This is the analysis we did if we really could win the league."

Medeama are searching for their first league title.

The championship was at the Matchweek 15 stage - with Aduana Stars leading the table - when the competition was brought to a halt.

At the time, a total of six cases had been recorded.

As of Monday, June 8, the West African nation has registered 9,910 cases involving 48 deaths and 3,645 recoveries.

The ban on football remains in place until at least July 31.

The Ghana Football Association (GFA) has set a June 30 deadline to make a final decision on the future of football in the country.

The football's governing body, through the Ghana Ministry of Youth and Sports (MoYS), made a proposal to the national government for a possible prompt return of football under conditions such as the playing of matches behind closed doors.

The request was, however, turned down.

Asante Kotoko and Hearts of Oak are the two of the most successful clubs in the history of the Premier League with 23 and 19 titles respectively.