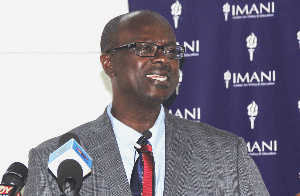 A public intellectual, Professor Stephen Kwaku Asare, known widely by his sobriquet, Kwaku Azar, has averred that our laws on causing economic loss to Ghana are not punitive enough to deter people who have an opportunity to engage in the act, explaining that rather than the laws serving as a source of deterrence, it is risk-free and rewarding.

The legal luminary explained that Section 35 of the Court Act, which allows a person who has caused economic loss to the state to offer compensation instead of being tried and sentenced, makes causing economic loss to the state a risk-free and highly rewarding act to engage in since that provision prevents the powerful who are well-placed to engage it tye act from going to jail.

“Section 35 of the Court Act allows a person who has caused economic loss to the State to offer compensation in lieu of a trial and sentencing. It legislates the convention that our big men are too big to go to jail.

The effect of this too big to jail policy is that causing economic loss to the State is a risk-free high return activity.

At the front end, there are weak controls that prevent big men from causing such economic losses. Once the losses are caused, the controls to detect them are weak. On the rare occasions that they are detected, investigations are done to clear them.

And if by any stroke of luck, they are ever prosecuted, the big men can compensate the State and be left alone. Thus, the big men have a “too big to jail” card at the back end,” he expatiated in a post sighted by MyNewsGh.com

Professor Azar noted that the cost to the ordinary citizen as a result of causing economic loss to the state is dire while the powerful benefit in millions of dollars.

“While the cost to the big men to cause loss to the State is zero, the benefit to them is almost always in the millions of dollars.

Of course, the cost of the loss to the small people is always astronomical as they are denied the basic services, in the form of WET, drugs and hospital beds,” he pointed out.

For him, to deter people from engaging in causing economic loss to the state, the laws must commit offenders to prison and confiscate their assets as well.

“If we are serious about causing losses to the State, we must replace this “too big to jail” policy with one that guarantees jail for the bigs, along with confiscating any assets that can be traced, directly or indirectly, to the losses that they caused,” he proposed.

His assertions follow agreements reached between the Attorney General and former Venture Capital boss, who has agreed to refund some monies he had ‘stolen’ from the state so that he avoids going to jail.