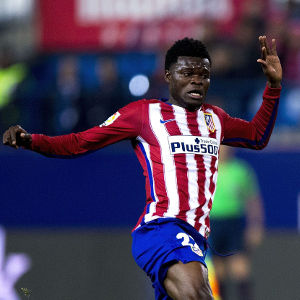 Ghana international Joseph Attamah Larweh will be happy to see compatriot Thomas Teye Partey make a transfer move to Arsenal in the summer.

Currently, on the books of Atletico Madrid, Partey has become the subject of transfer speculation following a run of fine performances for the side in the Spanish capital.

Aside from Arsenal, there is also Manchester United, Chelsea, Juventus, Inter Milan, Bayern Munich and PSG linked with the Ghanaian.

“I will be happy if he goes to Arsenal," Attamah, who plays for Turkish side Fatih Karagumruk on loan from Istanbul Basaksehir, told Citi Sports.

“He has done it all at Atletico and is well known as one of their best players.

“He has to move forward to a different league to prove his worth there as well.

“He needs to let people know that he is capable of succeeding in other places and not just Spain."

Since completing a loan move to Almeria in 2014-15, Partey has made a combined 118 La Liga appearances involving 80 starts. He has registered a total of 11 goals and seven assists.

He helped Los Rojiblancos win the Europa League and the Uefa Super Cup in 2018 and 2019 respectively.

Attamah's comments come on the back of similar remarks by compatriot and international teammate Kasim Nuhu Adams.

“For me, it is his decision because playing at Atletico Madrid is the same as playing in Arsenal.

"The two teams always make the same category in the league, fighting for the third and fourth place to play in the Champions League.

"But as we all know the Premiership is the best league in the world so if he joins Arsenal, I will be happy for him.”

Partey, who joined Atletico as a youth team player, spent the 2013-14 season on loan at then second division outfit Real Mallorca.

The 26-year-old, together with Attamah and Adams, represented Ghana at the 2019 Africa Cup of Nations (Afcon) in Egypt.