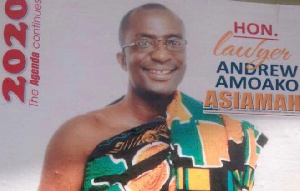 The Member of Parliament (MP) for Fomena Constituency, Andrews Amoako Asiamah, who entered the legislature on the ticket of the governing New Patriotic Party (NPP) in 2016 is going for his second term as an Independent Candidate.

This comes only two weeks to the party’s Parliamentary Primaries which have been scheduled for Saturday, June 20 in all 168 constituencies where the party has sitting Members of Parliament.

The first-term legislator did not file to contest in the upcoming primaries, 2nd National Vice Chairman of the NPP, F.F. Antoh said in an interview monitored by mynewsgh.com. “I have heard he is going independent but I can tell him that is not going to help him; by this he has automatically evicted himself from the party”, he said.

As sighted on Mynewsgh.com, the independent candidacy campaign of Hon. Andrews Amoako Asiamah has begun in earnest with his posters splashed at vantage points across the constituency and on vehicles that personally belong to him. A robust campaign team has also been instituted and has already hit the ground running.

There have been infighting within the rank and file of the NPP in The Fomena Constituency since Lawyer Amoako Asiamah became the MP in 2017; a dispute over the constituency album has been at the centre of the feud, with the MP and his followers on one side and the Constituency Chairman, Akwasi Anti Asamoah and his executives on the other side.

In February, it was reported that Chairman of the NPP in the Fomena Constituency, Akwasi Anti Asamoah would stop at nothing to see Andrews Asiamah defeated at the primaries and if it means paying threefold to buy the votes, he “is prepared”.

“This MP is very dumb; I swear to God that, I will resign from the chairmanship if he is able to get 40 votes out of the 300 at the primaries; if he tries to influence the delegates with money, then I’m ready to pay GHC15,000 if he gives them GHC5000”.

He made the pronouncement when an aspiring candidate, Philip Ofori Asante had gone to submit his nomination form.

“It will be in his best interest not to contest; I will not be contesting, but if he will use the money to induce the delegates, then if he says he will pay GHC 5000, I’m ready to pay GHC 15000 to each person; but I know the delegates don’t vote on how much money they receive from an aspirant because they are educated and responsible”, a charged Anti told the press.

Barring any changes, Philip Ofori Asante would be the candidate of the NPP in Fomena for the 2020 elections.